UKCMB launches blog with first post: ‘Mould: is it really an unbeatable monster?’ by Yasemin Aktas

UKCMB launches blog with first post: ‘Mould: is it really an unbeatable monster?’ by Yasemin Aktas

UKCMB have recently launched a new blog which will feature contributions from experts sharing informative and insightful commentary on a range of issues relating to developing a moisture-safe built environment in the UK.

The first blog post is by Dr Yasemin Aktas, Research Associate at the UCL Department of Civil, Environmental & Geomatic Engineering, with the title ‘Mould: is it really an unbeatable monster?’.

The blog discusses some findings from our research project on ‘Mould growth testing and benchmarking in“dry” and“wet” buildings‘ funded by Polygon UK and EPSRC IAA, and supported by Mycometer, as well as some useful tips on how to prevent mould in your property.

Read her piece below

MOULD: IS IT REALLY AN UNBEATABLE MONSTER?

If you don’t have any mould problems in your property, then count yourself lucky. It is an annoyingly pernicious problem, especially in this country. Even professionals or researchers who work in this field (including myself) are not immune from those little nasty smudges that glower down on you while you’re showering (if it is going to be a relief see the image below taken from MY bathroom). The thing is, mould is ubiquitous; indoors and outdoors. So we really cannot talk about air that doesn’t contain any mould spores or other fungal components. The problem however starts when these find suitable conditions to grow on at the corners of your bathtub, edges of your kitchen window or at the back of your furniture – all because they have warmth and all that *yummy* moisture to happily feed on.

Despite this being a common issue, there are still not well established procedures of testing mould level within a space and assessing how acceptable it is. With the aim of filling this gap and understanding the obstructions to establishing a methodology, UKCMB has just launched a project, in collaboration with and funded by Polygon UKand EPSRC IAA, and supported by Mycometer. As part of this project we have recently completed testing Nansen Village student accommodation (some of the mould we grew on plates from the sampled air are shown below), and collected essential information about the physical features of each property as well as certain usage habits of the residents via questionnaires. The analysis of the data we collected is ongoing, but here are some of our preliminary findings and a few tips for you to control excess moisture and mould in your homes: 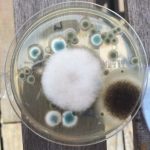 Yes, weather in the UK is not the best for most part of the year, to put it mildly. And heating is expensive. None of us want to lose already warmed up air inside our houses, but if you want to avoid condensation and mould and other moisture induced problems open your windows to ventilate your homes, even in winter. This is to let out the excess moisture building up not only from activities such as washing-up, cooking etc., but also simply from breathing.

Also trying to keep the lids closed and exhaust fan on while cooking, and limiting drying the laundry indoors (if you have alternative facilities, of course) can be extremely useful. Along with ventilation, a squeegee is massively helpful for getting rid of the water film on bathroom surfaces after a nice shower.

Although we were unable to find a very strong correlation between the visually determined cleaning levels and the mould concentrations in the properties that we tested, it is scientifically established that house dust has a lot of nutrition for mould. So if you don’t clean your house for extended periods of time you are increasing the likelihood of mould spores using the food in the dust, especially under high humidity conditions, to then form hyphae, i.e. the filamentous structure formed by growing fungal agents, making them visible to the eye. Yes, in this case conventional wisdom is at play: keep your living space reasonably clean.

Bleach is magic! It will make the stains disappear almost immediately. However, experts warn that this actually doesn’t make mould die away. Although use of bleach might suppress their return, the now-invisible mould is sneakily waiting for suitable conditions to come back to re-flourish. Still, I use it often in my own home as it is cure for aesthetic disturbance mould causes, if for nothing more. Make sure the windows are wide open and/or your mouth and nose are covered when you are spraying bathroom tiles with bleach solution though – anything bad for mould is also bad for you!

As opposed to the cleaning advise, your mom is not going to like this: Perhaps making your bed was not the best idea – our findings (and previous studies) show that air in the bedrooms is more mould intense than, for instance, living rooms. The reason for this is that we spend most of time in these, often also smaller, rooms, releasing a lot of water vapour into the air as we sleep. We also release damp into the beds, along with our body warmth. Luckily there is a solution to this: ventilating the room (and the bed) often. So, shake up the bedding, leave it messy once in a while, let it breathe –  and don’t forget that changing sheets is a never-ending Sunday chore!

WHAT IF NONE OF THIS WORKS?

On the other hand, your property might be suffering from a crucial design problem (faulty insulation causing cold bridges, for instance) or have some other intrinsic feature (basement floor, with one or multiple external walls underground causing raising damp), or else wall cracks filled with rain water, faulty drainage, leaking pipes – anything that facilitate water ingress, dampness or excess moisture –  that might render these little lifestyle tips inefficient. Remember that it is not an easy task to identify the cause and the source of persistent and overwhelming mould issues, and it might require an extensive survey. It is common for residents of very damp properties to use dehumidifiers to avoid mould formation and the typical, musty smell. In any case, contact a professional (or your landlord/landlady if renting) to have it sorted.